Home Latest News Bharti Airtel is slowing down on capex in Q1FY21 during the Covid-19...

After spending over Rs 11,000 crore as capital expenditure in the January-March quarter of financial year 2019-20 (Q4FY20), Bharti Airtel will “go slow” on capex in the current quarter.

Bharti Airtel reported a consolidated net loss of Rs 5,237 crore in Q4FY20 against a net profit of Rs 107.2 crore in the corresponding quarter last year. However, there was a surge in demand for internet services towards the end of the reporting period because of the nationwide lockdown announced on March 25, forcing the government and private firms to ask employees to work from home.

Total capex spend for the quarter was Rs 11,339 crore, an official statement by the company said. “We added more than 4,500 sites during the quarter and close to 30,000 mobile broadband base stations. We deployed a range of technologies to improve experience, shut down 3G networks in many more circles to re-farm this spectrum to 4G and substantial capacities being added to the core and transport infrastructure. This is normally a lumpy investment and we believe that front loading of this investment has been prescient as we were able to deliver an exceptional experience during Covid-19 despite seeing a massive surge in consumption,” said Gopal Vittal, MD and CEO for India and South Asia, in a post earnings analysts call. He added this was the reason the capex was much higher in the quarter and should moderate in the coming quarter.

Airtel said the firm had undertaken a capex investment of Rs 25,359 crore on a consolidated basis during the year to ensure superior customer experience. 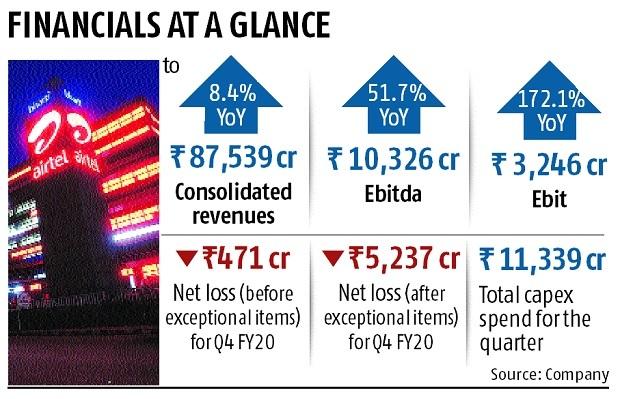 The company’s revenue growth in Q4 was healthy at 14.4 per cent year-on-year (YoY), with the mobile business growing at 21.8 per cent. This was driven by sustained momentum of 4G customer additions of over 12.5 million, coupled with improved tariffs.

The consolidated revenue for the quarter came in at Rs 23,723 crore, a growth of 15.1 per cent YoY on reported basis. The company expects strong data traffic growth of 74.1 per cent YoY. The average revenue per user (ARPU) grew 25.2 per cent at Rs 154 as against Rs 123 a year ago. Sequentially, ARPU rose 14.3 per cent from Rs 135 in December 2019. The firm had announced a 40 per cent tariff hike in December.

As on March 31, the company had 423 million customers, an increase of 4.9 per cent as compared to 404 million in the corresponding quarter last year.

Total minutes of usage on the network during the quarter was 902 billion, representing growth of 13.3 per cent, compared to 796 billion in the corresponding quarter last year. Mobile data traffic grew 74.3 per cent to 6,688 billion MBs during the quarter, as compared to 3,836 billion MBs in the corresponding quarter last year. Airtel’s consolidated net debt, excluding lease obligations for the company, stood at Rs 88,251 crore as on March 31, down 18.5 per cent from Rs 1.08 trillion a year ago.

Hyperx launches its Quadcast Microphone in India for Streamers and casters