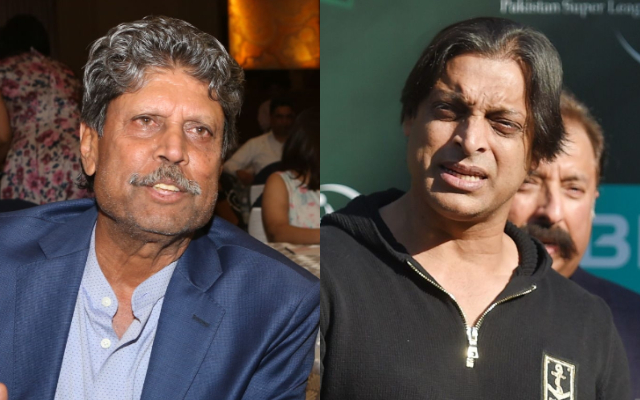 The former Pakistani cricketer Shoaib Akhtar is a bit beaten for bringing an Indo-Pakistani charity series to Dubai in the middle of a coronavirus pandemic. Not only the former Indian players, but also Zahir Abbas and other Pakistanis made it clear that the series would not take place. By the way, it was Kapil Dev who made a harsh remark: India has enough money and doesn’t need a series.

He believed that holding cricket matches in these alarming circumstances would only put the players in danger. Kapil also said the risk wasn’t worth the risk because only the three-game series wasn’t very important for fundraising, adding that no cricket games should be played in the next five to six months.

However, Shoaib Akhtar believes that the captain who won the World Cup in India did not understand the point of view from which he proposed this series. It seems that he is pretty sure of the possibility to make a profit, as the spectators will certainly only be involved in one game between India and Pakistan.

Shoaib Akhtar is convinced of his proposal

I don’t think Kapil Dev understood what I was trying to say. Everyone will be trapped in the economy. It’s time to get our affairs in order and make a profit. I’m talking about a broader perspective, about economic reform. The world audience will be connected to a game, it will make money with it.

Kapil said he didn’t need the money, and he certainly didn’t need it. But everyone else does. I think this proposal will be considered soon, he said in a conversation with Aaj Tak. Shoaib Akhtar also said he knows India better than Pakistan’s current Prime Minister, Imran Khan, and added that both countries suffer from poverty.

I said I know India better than even Imran Khan. I’ve been to a lot of places and talked to a lot of people. I keep telling people what Indians are. There is a lot of poverty in our countries. I feel sad when people suffer. As a person and as a Muslim it is my duty to help as much as possible, the 44-year-old boy continued.

Students Called out their School’s Racism and Caught Attention

Brand New Second Season of The Twilight Zone Gets a Trailer and Summer Premiere...

Young Architects Fight to Save Historic Building from Developers