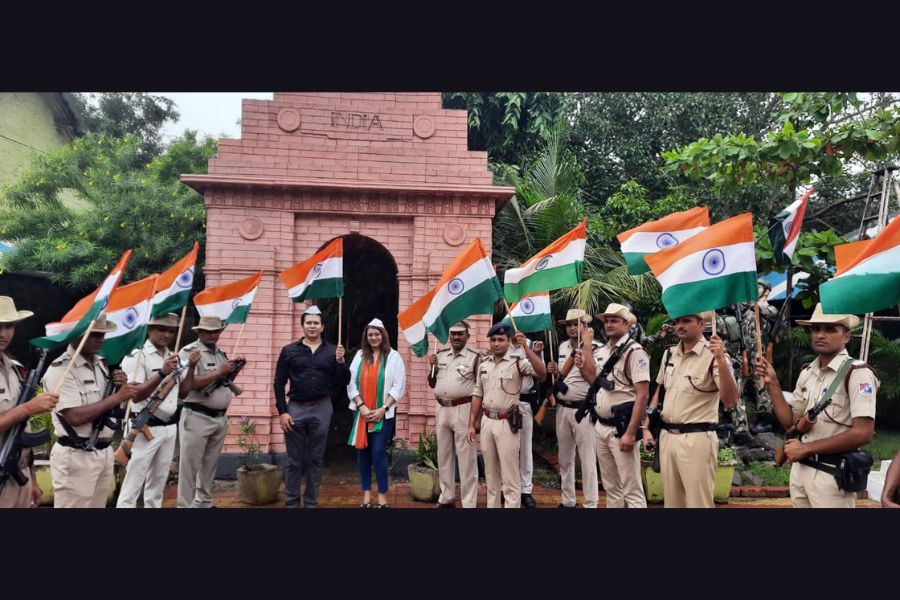 August 19: Social worker and rally driver Bina Shah from Mumbai organised a car drive from Mumbai to Delhi under the auspicious occasion of Azadi ka Amrut Mahotsav. During the campaign, they also distributed tricolour flags in different cities. When this Tiranga car reached Surat, well-known environmentalist Viral Desai showed a green flag to the vehicle at the India Gate located at Udhna Shahid Smruti van.

When Bina Shah’s Tiranga yatra reached Surat, it paid a special visit to the green Udhna station. At the station, in Shahid Smruti van RPF, jawans distributed Indian tricolour flags. Tiranga car was flagged off for Delhi after that by Greenman Viral Desai.

On occasion, Viral Desai said, “We have started the movement of Satyagrah against pollution under auspicious Azadi ka Amrut Mahotsav. Supporting Bina shah’s Tiranga yatra is like clubbing two great social awareness movements. Bina Shah is reaching India Gate at New Delhi via India Gate of Shahid Smriti van. I am very happy with all the Tiranga yatra’s success, and she has inspired many on her journey. Bina Shah said, “Work of green Udhna railway station is dedicated to all martyrs of the country, and it is a matter of pride for us that our Tiranga yatra got a halt here. We must prioritise ecosystem restoration and climate change in celebrating Azadi ka Amrut Mahotsav. I am happy that green man Viral Desai and his foundation are working on the issue.”

It must be noted that some time ago, the Udhna railway station was declared the world’s first green railway station by the India Book of Records, which was built and prepared on the theme of ecosystem restoration and climate change.