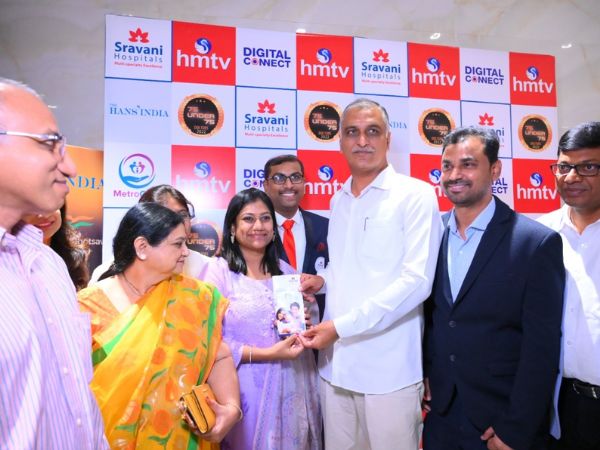 Hyderabad (Telangana) [India], August 23: Tanneru Harish Rao, Minister of Finance, Health and Family Welfare, Government of Telangana, launched the Sravani Hospitals brochure at the ’75 Under 75 Doctors 2022′ event organised by the Hyderabad Media Television (HMTV) and The Hans India to honour doctors from across the country for their efforts and sacrifices during pandemic times on the occasion of Azadi Ka Amrit Mahotsav.

Five doctors from the Sravani Hospitals, namely Dr. Naveen Chettupalli, Managing Director of Sravani Hospitals; Dr. Ashwini Annam, senior obstetrician and Gynecologist; Dr. Srinivasulu Talacheru, senior consultant physician; Dr. Sushma Peruri Laparoscopic Surgeon, and Dr. Prasad Neelam consultant surgical gastroenterologist received the ’75 Under 75′ awards for their dedication and services in the health sector of Telangana along with other 70 doctors from across the country and Telangana state. “It is a matter of great pride that five of our doctors have been awarded 75 Under 75 awards by HMTV,” said Chetupalli. “We are honoured that the Health and Finance Minister of Telangana released our hospital’s brochure at the awards event.”

Dr. Prasad Neelam, a consultant surgical gastroenterologist at Sravani Hospitals, said, “We have all world-class facilities at Sravani Hospitals along with modular operation theatres and 4k laparoscopy. It is one of the most sophisticated and ultra-modern hospitals in the entire Telangana state for providing advanced medical care to the patients.”

On the occasion of India’s 75th Independence Day, for the first time since the Coronavirus pandemic, HMTV and The Hans India awarded the title ’75 Under 75′ to 75 renowned doctors from various medical fields across the country in recognition of their service to the nation.

The 75 Under 75 awards signify freedom from complex diseases, cancer, cardiac arrest, AIDS, and other illnesses.