New GUINNESS WORLD RECORDS™ title as the Most Registered Blood Donation with over 70,000 Blood Donors in South Korea 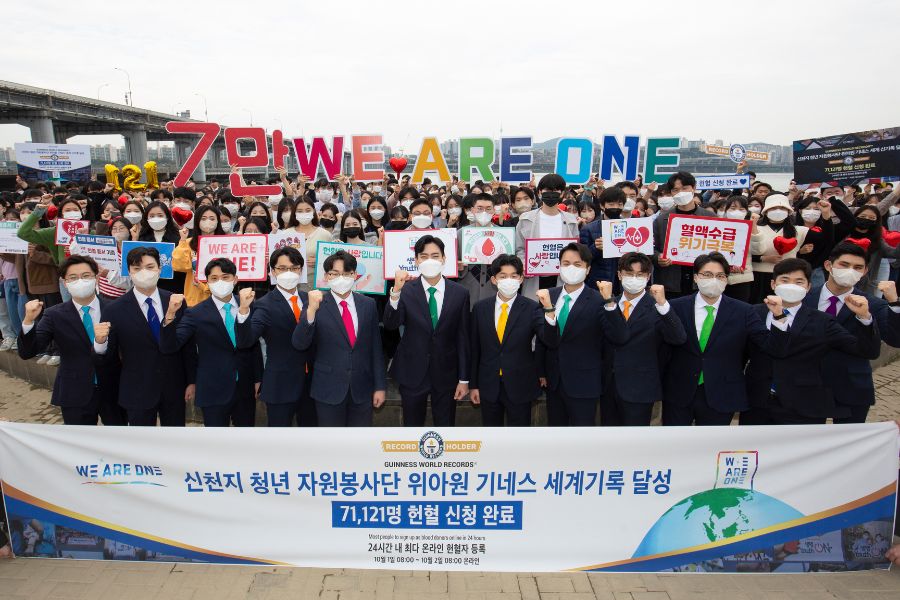 October 20: Korean volunteers were listed in the GUINNESS WORLD RECORDS

for the challenge of Most people to sign up as blood donors online in 24 hours. On 1st of October the youth volunteer group ‘WE ARE ONE’ completed online blood donation applications for 71,121 volunteers for 24 hours to challenge the World Record.

The record challenge of the 70,000 blood donors was prepared to raise awareness of the importance of blood donation to overcome the blood shortage caused by COVID-19, led by We Are One, a Korean youth organization conducting the ‘Life ON Youth ON’ blood donation campaign.

According to the Global Status Report on Blood Safety and Availability published by the WHO in June 2022, shortages of blood have impacted all countries during the COVID-19 pandemic. Also in January 2022, the American Red Cross announced that US is facing a national blood crisis – its worst blood shortage in over a decade.

Mr. Junsu Hong, the head of WE ARE ONE, said, “It was possible not only because of the volunteers, but also the Korean Red Cross officials working at the forefront to solve the blood shortage, and the IT company that developed an efficient blood donation application system. In that sense it has great significance. I believe COVID-19 can be defeated when we are all one,” he said.

Since its launch on July 30 this year, WE ARE ONE has been conducting the ‘70,000 blood donation’ campaign since August 27. As of the 11th, a total of 43,811 people completed the blood donation, and it is planned to complete the blood donation of 70,000 people by November.

The official record is accessible in the GUINNESS WORLD RECORDS

The post New GUINNESS WORLD RECORDS™ title as the Most Registered Blood Donation with over 70,000 Blood Donors in South Korea appeared first on Republic News Today.