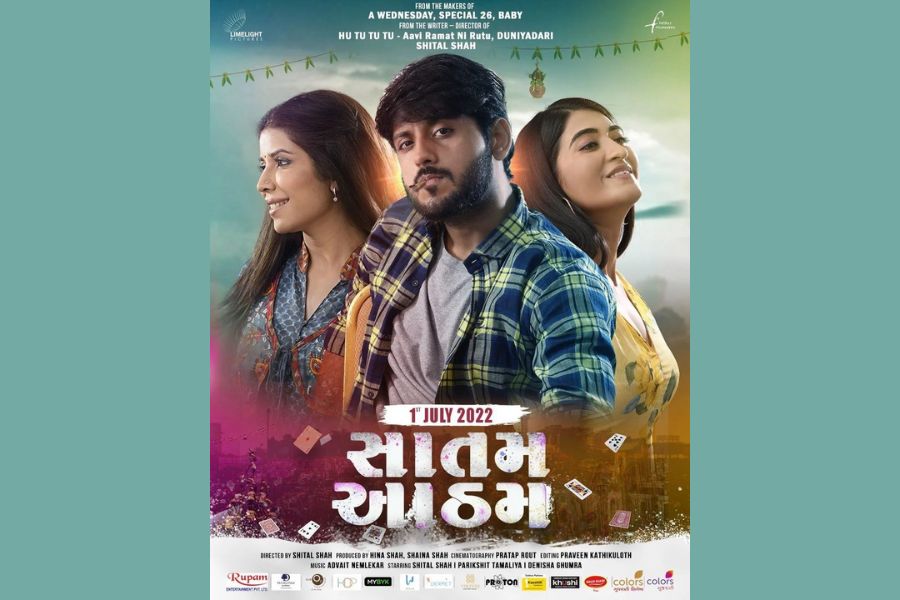 Ahmedabad (Gujarat) [India], July 1: The special screening of the Saatam Aatham took place on Wednesday in Ahmedabad, and the early reviews have started flooding the internet. Lead actor Parikshit Tamaliya, Denisha Gumrah and actor-director Shital Shah and the entire cast of the flick have been receiving rave reviews from critics and the Gujarati film fraternity, who have called it the Most entertaining Gujarati Movie of the year.

Saatam Aatham brings a power-packed story untold in Gujarati cinema to date. A beautiful cinematic experience, this Gujarati film breaks the norm and offers a freshness that the audiences deserve and enjoy. Crisp storytelling with a noteworthy performance by lead actor Parikshit Tamaliya (Munna), who carries the film on his shoulders. Directed by Shital Shah, this is her third directorial and one of her many as an actress. She makes Chitra come alive and proves her acting prowess once again. Seamlessly put together Shital brings the much-needed newness as the director to the new age of Gujarati cinema. Denisha carries her role as Vishakha gracefully and effortlessly.

The Internet is flooded with reviews, and they are mostly positive. Critics have hailed Shital Shah’s performance as Actor and director and called Parkshit Tamalia’s Munna killer performance. Some critics point out that the movie was a fast-paced and adrenaline-induced ride and praised the direction. The movie is releasing across Gujarat on July 1.

The music of the film has been received by the audience quite well. As gripping and unexpected events keep viewers on the edge of their seats, the songs are melodious, especially the romantic music “Saathi re”, which stays with you for days. Limelight pictures, along with Friday Film Works, bring out a winner in Saatam Aatham- a watch film.

Limelight Productions is an established production house with a vision to make cinema that resonates with every human being. In the past, the production house has produced blockbusters like Hu Tu Tu Tu, which won 8 state awards. She also directed the film ‘Duniyadaari’ a remake of a superhit Marathi film. A production house led by three women, they have set out to bring their vision onto the silver screen.