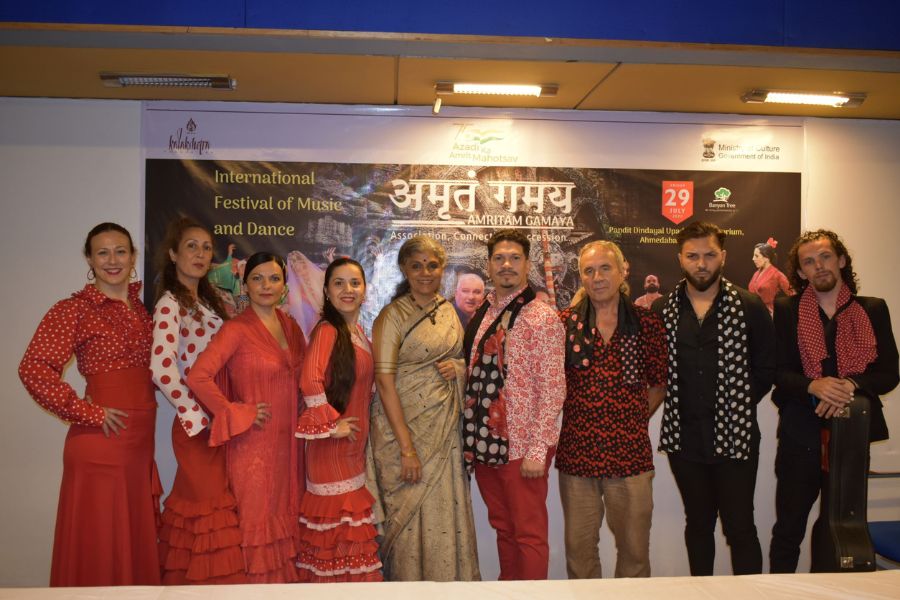 July 28: The International Festival of Music and Dance, proclaims association with the past, connecting through art and delving deep into the roots of the rich heritage of India so that succeeding generations can explore, expand and contribute to the cultural and creative economy of our Nation. It will recreate awareness of the connection between the varied forms of dance and music, both classical and folk, prevalent throughout the length and breadth of India. It also traces the parallels between certain Indian and international art forms through curated presentations in various venues across the country. Amritam Gamaya echoes the spirit of Azadi Ka Amrit Mahotsav by creating a movement that connects the different parts of India, spreads awareness among the youth, and cherishes Indian culture and traditional art forms. The Ahmedabad event will be held at Pandit DinDayal auditorium, at 6:30 PM on 29th July. Friday.

India is among those few countries that can boast of a rich tapestry of traditions that continue to be alive and thrive even in the 21st century. This intangible heritage has traveled down millennia, mostly orally transmitted from generation to generation in an uninterrupted flow. And, it is this precious heritage that gives us our unique identity.

For Azadi Ka Amrit Mahotsav (AKAM), celebrating 75 years of India’s Independence, Amritam Gamaya – The International Festival of Music and Dance, is a celebration of this journey. A celebration that will bring Indian culture alive in a truly spectacular manner, and also instill pride in our rich heritage, especially among the youth. It will present the diversity of our performing arts as well as art forms from around the world in a grand display traversing multiple cities in India.

Best of the carriers of varied living traditions from across India i.e. tribal, folk, semi-classical, classical, innovative contemporary fusions, as well as artists from other countries will all be presented on one single platform.

About the Ministry of Culture – Azadi Ka Amrit Mahotsav:

Culture plays an important role in the development agenda of any nation. A country is as diverse as India is symbolized by the plurality of its culture. The mandate of the Ministry of Culture, Government of India, revolves around the preservation and conservation of our cultural heritage and promotion of all forms of art and culture, both tangible and intangible. The Ministry develops and sustains ways and means through which the creative and aesthetic sensibilities of the people remain active and dynamic.

Azadi Ka Amrit Mahotsav is an initiative of the Ministry of Culture, to celebrate and commemorate 75 years of independence and the glorious history of its people, culture, and achievements. It pays homage to India’s freedom fighters and to the people of India who have contributed to its culture and traditions and been instrumental in bringing India thus far in its evolutionary journey. Azadi Ka Amrit Mahotsav is an embodiment of all that is progressive about India’s socio-cultural, political, and economic identity.

The official journey of Azadi ka Amrit Mahotsav commenced on 12th March 2021 which started a 75-week countdown to our 75th anniversary of independence and will end post a year on 15th August 2023. Kalakshetra Foundation was established and nurtured by Smt. Rukmini Devi Arundale, a visionary and a revivalist of arts, is a tribute to the beauty of Indian aesthetics. Her pioneering spirit helped countless young people realize the beauty and depth of classical art. Rukmini Devi believed that a cultural renaissance would be as meaningful as the struggle for the political freedom of India – that a country that was losing its identity would be best served by a revival of its traditional arts. Kalakshetra Foundation is an institution not merely for the development of art. It exists in order that youth may be educated, not to become artists alone, but to have the right attitude towards life and art, so that they may be of great service to our country.

Kalakshetra has been functioning as an autonomous body under the Ministry of Culture, Government of India since 1993. It has been declared an institution of National Importance. Shri N. Gopalswamy, IAS who served in many capacities in Gujarat was our former Chairman. Shri S. Ramadorai, Ex-CEO, and MD of Tata Consultancy Services is our current Chairman.

Kalakshetra Foundation under the direction of the Ministry of Culture is presenting ‘Amritam Gamaya’ an international festival of Music& Dance. This will be a unique event celebrating the Intangible, Immortal, and Invincible heritage of Bharat. This will be part of the ‘Azadi ka Amrit Mahotsav’ of the Government of India, commemorating 75 years of Indian Independence. This International festival will travel to 15 cities under the aegis of the Ministry of Culture. The first city where the event is to be premiered in Ahmedabad.

This festival is being Co-curated by Banyan Tree Events, a premier cultural organization dedicated to the cause of promoting Indian performing arts for more than 25 years now.

The post AMRITAM GAMAYA – The International Festival of Music and Dance by the Ministry of Culture and  Kalakshetra Foundation appeared first on Republic News Today.